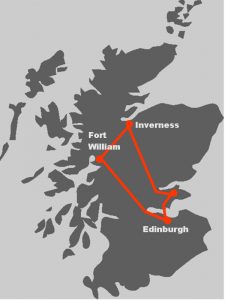 Our Outlander experience covers some of the most-loved film locations and will transport you right back to the 18th century. On your itinerary you will find familiar sounding places such as Cranesmuir’ Eldridge Manor, Mrs. Baird’s Bed&Breakfast, Farrell’s General Store, Campell’s Café, Dalneigh Parish Church, Culloden battlefield and Castle Leoch, to name but a few.

On your way around the various locations you will pass through some beautiful Highland scenery, such as the Cairngorm National Park, Loch an Eilean, Glen Affric and Glencoe, a truly astonishing landscape shrouded in mystery and with a dramatic history. Outlander Fans will recognise it from the opening scene of the first episode of Season 1. Your trip ends in the magnificent capital Edinburgh, one of the most beautiful cities in the world.

Walk in the footsteps of Jamie & Claire, stay in hand-picked authentic accommodation and enjoy the famous Scottish hospitality. This tour is a must for every Outlander fan!

Individual arrival in Edinburgh. A short drive will take you to the iconic Forth Bridges in South Queensferry, where you will cross over the Firth of Forth into the region Fife. This former kingdom is a true paradise for Outlander Fans. Many famous scenes of the series were shot in nearby localities and castles. A definite highlight not to be missed is the picturesque historic village of Culross, which features as ‘Cranesmuir‘ in the series. Culross Palace, with its beautiful herb garden – which Claire often visited – offers splendid views over the village and the Firth of Forth. Accommodation: Fife

After a hearty Scottish Breakfast you will be ready to explore some other Outlander locations. Balgonie Castle, for example, served as a model for Eldridge Manor, where Jamie was taken care of after he was rescued from Wentworth prison. The 14th century Castle is idyllically located on the southern bank of the river Leven and surrounded by fields. Your next stop, the beautiful town of Falkland, is equally charming. And every Outlander Fan will be familiar with its High Street, as it substituted for Inverness, where Claire and Frank spent their honeymoon after the Second World War. Here you will also recognise ‘Mrs. Baird’s Bed&Breakfast’, ‘Farrell’s General Store’, ‘Campell’s Café’, ‘Dalneigh Parish Church’ and a lot more. In the afternoon you can visit Aberdour Castle, which was built in 12th century. It looks a lot like Abbey Beaupre in France, where Jamie found refuge. Accommodation: Fife

Today you will drive through the Cairngorm National Park, passing beautiful heather-covered moorland and impressive granite plateaus. The mountains in the Central Highlands display the finest collection of different landforms outside arctic Canada, and some peaks are snow-capped even during the summer months. Stop at the Highland Folk Museum of Newtonmore, the setting of the village of Clan MacKenzie, and learn more about how people really lived in the 18th century. Afterwards your trip takes you to Inverness, the capital of the Highlands. On your way you will pass the Drumnochter pass and the highest Distillery in Scotland, Dalwhinnie, which was built on an old smuggling route. If you want to take a walk around one the nicest lakes of the country, make sure to stop at Loch an Eilean and enjoy the fresh air and stunning panoramas. Also nearby is the forest of Tulloch Ghru, where some of the main scenes were shot. For example Jamie and Claire’s ride from Craigh na Dun to Castle Leoch. Accommodation: Inverness

Culloden Battlefield is the location where Jamie and Claire had to say their goodbyes before the devastating Battle of Culloden (Season 2). The visitor centre is brilliant and allows you access to the actual battlefield. Also well worth a visit is the romantic Castle Leod near the Victorian Spa town of Strathpeffer. For more than 500 years it has been the home of Clan MacKenzie and was used as Castle Leoch, the headquarter of Callum and Dougal MacKenzie. Close by is the village of Beauly, which has a connection to Clan Fraser of Lovat, Jamie Fraser’s Clan. Here you can explore the peaceful Beauly Priory. In the novel it’s the setting for Claire’s meeting with clairvoyant Maisri. In the evening you can experience the lively nightlife of Inverness, with its pubs and live music. Accommodation: Inverness.

Today you will travel through Glen Affric, one of the most beautiful and diverse valleys in the West Highlands. Here you will drive on the old road that once connected Clan MacKenzie in the west and Clan Fraser on the East Coast. In ‘The Outlandish Companion’ it also features as the area, where Lallybroch is located. Afterwards you might want to visit the impressive ruins of Urquhart Castle, just like Claire and Frank did. From here you have unrivalled views over Loch Ness, probably the most famous Lake in Scotland, and also go on one of the many boat tours on offer. If you’re lucky you might even spot the elusive  monster, affectionately known as Nessie. Continue your drive south alongside the Caledonian Canal and you will reach Fort William in the afternoon. Due to its location – on the Atlantic coast and right at the foot of Ben Nevis, Britain’s highest mountain – the town is best known as one of the Outdoor Capitals of the UK Accommodation: Fort William

A scenic drive along the beautiful sea loch Loch Linneh takes you to Glencoe, a truly astonishing landscape shrouded in mystery and with a dramatic history. Outlander Fans will recognise it from the opening scene of the first episode of Season 1. But mostly, it’s natural beauty simply makes it a highlight of any journey through Scotland. The next stop on your trip is the uninhabited area and vast expanse of boggy moorland of Rannoch Moor, one of Europe’s last remaining wildernesses. It’s the place where Claire disappeared in the stone circle. The stunning scenery is a must-seen for everyone, not only for Outlander Fans. Later on you can visit Doune Castle, which was the setting for Castle Leoch as well as the ruin Claire and Frank visited in the 20th century. The castle also featured as ‘Winterfell’ in Game of Throne as and was used as set for the Monty Python movies. Afterwards you make your way to Edinburgh. Accommodation: Edinburgh

Day 7: The Capital and Blackness Castle

Edinburgh is one of the most beautiful cities in the world. On a city tour you will explore the Old and Newtowns of Edinburgh, which gained UNESCO World Heritage status in 1995. On the famous Royal Mile you will find the Canongate Kirk and the tavern ‘World’s End’, where Claire and Jamie helped Mr. Willoughby. To learn more about the historic facts of the Jacobite uprisings, you can visit the National War Museum at Edinburgh Castle. A short drive takes you to South Queensferry, where Midhope Castle is located. Better known among Outlander Fans as Lallybroch, it is home and place of longing for Jamie. And while you’re here, you might as well see two other locations: Hopetoun House, residence of the Duke of Sandringham in Season 1, and Blackness Castle, which was used as Fort William. Because of its shape, which resembles a boat, it is also called “the ship that never sailed”. You can reach the ruins by car or walk through the beautiful Hopetoun Estate. Accommodation: Edinburgh

In the morning, on your way to the airport, you will stop and visit Linlithgow Palace. It was the birthplace of Mary Queen of Scots and for a long time the favourite domicile for the royal court during their journeys between Edinburgh and Stirling. It is the oldest of her remaining residences. Here you can explore the place Jamie was held captive. It is said that wine was running out of the fountains for Bonnie Prince Charlie. In the evening you have to say goodbye to this wonderful and hospitable country and an impressive journey.

This tour can also be done by public transport, as an alternative to driving.

When deciding on your travel dates, please bear in mind that we require at least 6 weeks to prepare. Every trip is meticulously planned and organised, and the information pack is compiled with great care and attention. We also have to allow time for the information pack to be delivered (postal delivery can take on average 4 weeks in Europe). If you do want to travel at short notice, please contact us by email. Thank you for your cooperation!